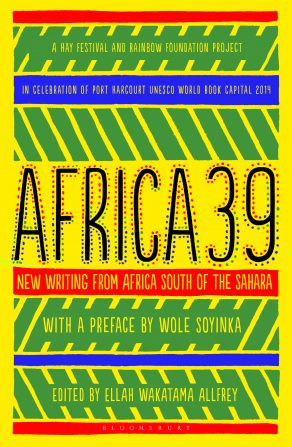 Africa39 is a collaborative project initiated by the Hay Festival in partnership with Rainbow Book Club, celebrating Port Harcourt: UNESCO World Book Capital 2014 by identifying 39 of the most promising writers under the age of 40 with the potential and talent to define trends in the development of literature from Sub-Saharan Africa and the diaspora. Africa39 follows the success of two previous Hay Festival initiatives linked to World Book Capital cities, Bogotá39 (2007) and Beirut39 (2009).
The judges for Africa39 were Margaret Busby, Osonye Tess Onwueme and Elechi Amadi, selecting from submissions researched by Binyavanga Wainaina. The writers’ names were announced at the London Book Fair on 8 April 2014. An anthology entitled Africa39: New Writing from Africa South of the Sahara, featuring work by the 39 writers was published by Bloomsbury in October 2014, edited by Ellah Allfrey and with a preface by Wole Soyinka.

Be the first to review “Africa 39” Cancel reply