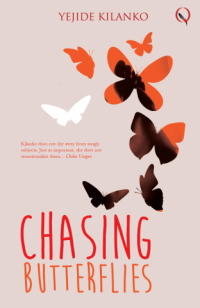 “A good mother does not run from her child’s home. She always stays and fights.”

Titilope Ojo left Nigeria for the United States over a decade ago, but her mother’s words remain fresh in her mind. Titilope is married to Tomide, a handsome and charismatic man who she is afraid of. She spends each day anticipating his moods and lives in fear of offending him. She takes great care to try and love him just the way he wants, but will it ever be enough? As life continues to spiral out of control, Titilope finds herself alone at a crossroad where she must choose between duty and survival.

Be the first to review “Chasing Butterflies” Cancel reply 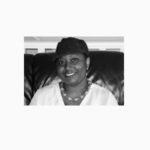 Yejide Kilanko was born in Ibadan, a sprawling university city in south-western Nigeria. She read just about anything she could lay her hands on and that love for reading led her to poetry writing when she was twelve. It was the best way she made sense of the long, angst-filled teenage and young adult years that followed.
After a big, loud, African wedding, she joined her husband in Maryland, USA. For a decade she stayed home to raise their three children, moved to Canada and went back to school to become a social worker.
Yejide started writing her debut novel, Daughters Who Walk This Path, in 2009 and it was published in Canada (2012) and in the USA (2013). Prior to 2009, she didn’t think she could write a novel, so she’s living proof that life can bring new dreams when least expected. Yejide currently lives in Chatham, Ontario, where she’s working hard on her next book.